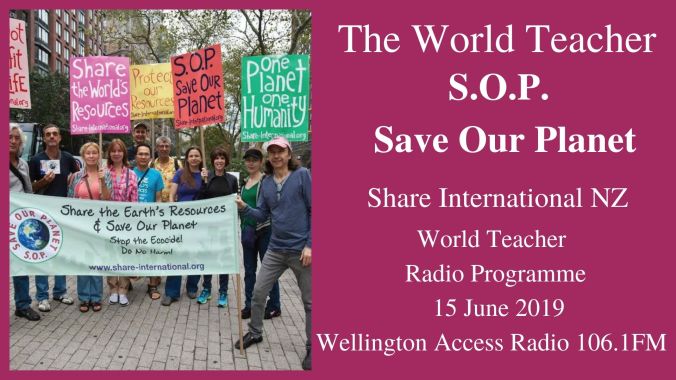 Save Our Planet (Part 2)
Today we have part two, of a two part compilation, on the environmental issues facing humanity. Our first article is titled “Save Our Planet” by Benjamin Creme’s Master, on the 8th of September 2012. It begins:
When one looks deeply into the present situation in the world, two things stand out as particularly important: the danger of war and the acceleration of the Earth’s ecological imbalance. There are, of course, many other problems: the economic debacle which affects many countries, especially in the West; the huge increases in the price of food, especially the staple diet of many millions; the huge, and growing, disparity in living standards between the rich and the poor.

The two first named must command the attention of all sensible men and governments for they present the greatest threat to man’s well- being. Wars, large and small, should by now be unthinkable, but, sadly, this is not the case. Even a world which has known the folly and futility of war at its most terrible has still not relinquished, totally, that abomination.

Apart from war, nothing so profoundly affects the future of all men as much as pollution. Some countries have recognised this fact and have taken some steps to limit pollution and global warming. Others, sometimes the chief polluters, deny the reality of global warming despite the overwhelming evidence to the contrary.

Daily, now, the climatic changes prove beyond doubt that the planet is sick and needs immediate and skilful care to re-establish equilibrium. Time is running out for men to halt the transformation which is being daily wrought on planet Earth. Every man, woman and child must play their part in the task. Time is, verily, running out.
S.O.P. Save Our Planet!