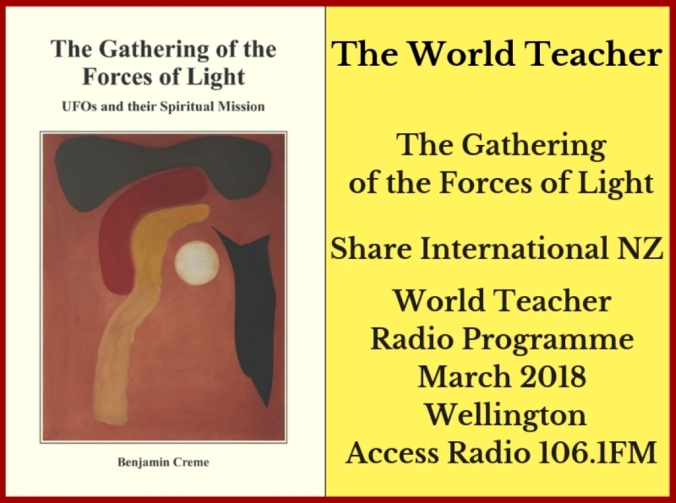 The Gathering of the Forces of Light
We present the third and final part in our series on ‘UFOs and Their Spiritual Mission’. Our first article is an extract of a talk given by Benjamin Creme at the Transmission Meditation Conference held near San Francisco, USA, in August 2009 and featured in the January February double issue of Share International magazine. Mr Creme begins…

“There is an enormous amount of information of one kind or another about UFOs, some of it true, absolutely authentic, and masses of it which is utterly unreal and unauthentic. This is a huge and all-important subject.

In 1953 an Englishman named Desmond Leslie wrote a book, Flying Saucers Have Landed. He was a gifted man who wrote plays, novels and music, a cousin of Winston Churchill. Having written this book, he heard about an extraordinary man living in the US, George Adamski, who had written an article in which he claimed that he was in touch with people from other planets. Adamski said that a group of observers could vouch for his meeting with a man from Venus.

One day, by arrangement, in November 1952, Adamski went into the desert, near Desert Center, California. The group of observers stayed a few hundred yards away and viewed the scene through binoculars. A spacecraft landed, of the type that flew alongside the commercial planes in the 1940s and 1950s.

According to Adamski a man came out of the spacecraft dressed in a one-piece suit.
He talked to Adamski without using language, at least not immediately, but made him understand what he had to say. In fact, they had a telepathic rapport.

The man, who said he came from Venus, was wearing shoes the soles of which were cut in such a way as to leave clear and pronounced impressions in the desert sand, which were later photographed by the group who were watching from a distance.

The word was put out that a man from Venus had landed in a spacecraft. Leslie heard about this incident and wrote to Adamski, suggesting that Adamski add his sighting report in the desert to the book that he had already written about the history of flying saucers down the ages.”

The Reappearance of the Christ

The Gathering of the Forces of Light

Here To Help: UFOs and the Space Brothers

George Adamski: A Herald for the Space Brothers

Listen to 2017 Radio Podcasts:
Archives and Side Widget on the right =>