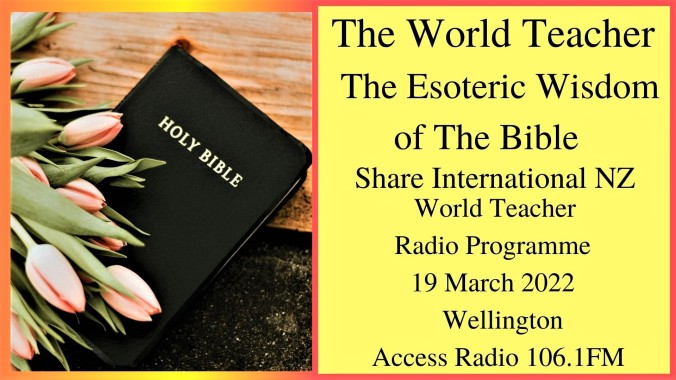 The Esoteric Wisdom of The Bible
In our programme today, we will be discovering the esoteric wisdom in the Bible. Our material comes from articles, written for Share International magazine, by the late Reverend Howard Ray Carey in the mid 1980s. His personal account of how he came to believe the information about the presence and the work of Maitreya the Christ makes interesting reading. We’ll probably cover his story in a future programme, but for now we are going to read a selection of his articles. He begins:

The Bible is full of esoteric wisdom, but it may take some insight to discover it. It seems to be the case, especially in the past, that esoteric information, when embodied in literature made available to the public, was veiled beneath exoteric or more obvious interpretations. For if the deep symbolic meanings in biblical literature had been made obvious, on the surface, it is questionable whether the Bible could have survived, especially through the dark ages. It probably would have been discarded as irrelevant.

It seems to be an indication of genius on the part of many writers, whose works later were gathered together to make up the Bible, that they produced material which could be interpreted on at least three different levels. The first level is of course a quite literal one. The second is a bit more sophisticated but still subject to interpretation by the concrete mind of the orthodox religionist. The third carries an esoteric meaning.

Let us take as an example one of the best known and most loved of Jesus’s parables, that of the prodigal son, found in Luke chapter 15 verses 11-32. Looking at this from a very literal perspective one might explain it as a warning about what happens to a reckless youth, one who demands everything he can get from his father, and squanders it all on drugs and ‘women’. Then he ends up broke and feeding pigs (the ultimate humiliation for a Jew of that time), and finally comes crawling back to dad in a state of near starvation.

A second but still fairly obvious interpretation which might be made by a traditional churchman could be: Here is the rebellion of youth, striking out against parental authority. The youth sinks into a life of flagrant ‘sin’. But sometime before death he accepts Christ, becomes converted – so he is saved from hell, and the father (God) welcomes him to heaven following death.

The third level of interpretation, though there may be many variations, sees it this way: The son, leaving home and traveling to the far country, indicates the Soul or higher Self on the involutionary spiral of experience – finally sinking into the deepest possible involvement in matter. In that mess he finally discovers that the pleasures and rewards of materialism leave him deeply hungry for a more satisfying life. Thus he comes to some measure of realization of himself. Then he begins the long journey of many lifetimes back to the ‘father’s house’ (the Monad), the home of the Soul.

2021 Podcasts:
Christmas of the Soul
Manifesto for a Political Emergence
Hidden Energy
Beauty and Art
Messages from Maitreya the Christ
A Prayer for the New Age
The Danger of a Return to Normal
The Restoration of Our Planet
Invisible Peril
Health and Healing
Encounters with Angels
Humanity’s Free WillJustice

2020 Podcasts:
The Emergence & Day of Declaration
UFOs and Their Spiritual Mission (Part 2)
UFOs and Their Spiritual Mission (Part 1)
Benjamin Creme Interview – Transmission Meditation
Maitreya’s Teachings – The Laws of Life
Benjamin Creme Interview
Justice and Human Rights
The Art of Living
Time for Universal Basic Income
A Simpler Way of Life
Problems of Humanity
Education in the New Age
Introduction to the World Teacher

2019 Podcasts:
A Blueprint for Sharing
The Son of Man
The Growth of Consciousness
The Seven Rays
The Basics of Esotericism
Life After Death
Spirituality and Sharing
Save Our Planet (Part 2)
Save Our Planet (Part 1)
The Bible and Major Initiations
Transmission: A Meditation for the New Age
The Awakening of Humanity
The World Teacher For All Humanity